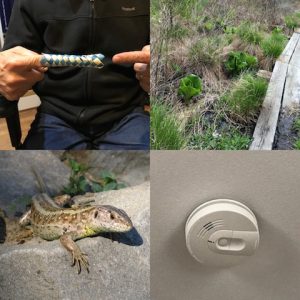 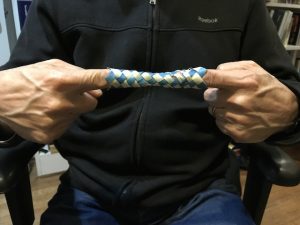 #1. Your Relationship to Anxiety

Do you remember this childhood toy, the Chinese Finger Trap in the photo to the right? What happens when you put your fingers inside and pull?

The Finger Trap clings onto to you, trapping you.

Do you remember how to get out of it?

You push your fingers towards each other, and the Finger Trap relaxes its grip on you. You are now able to get your fingers out of it. 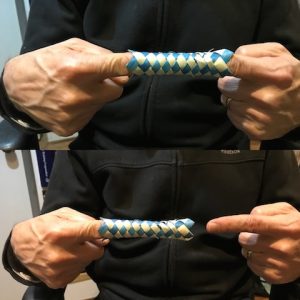 This is you pulling away from anxiety when you feel it coming up, and anxiety gripping even harder. Anxiety is tricky, wanting to keep you in its grasp. The more you say to yourself, “I don’t like this yucky, scary feeling”……….. the harder it latches on. *

Imagine walking on a campus with lots of separate buildings. There are sidewalks for the students to walk on to get to their classes.

But let’s say students want to get to class quicker, taking a short cut, and walk on the grass. If they keep doing this, a dirt path will form. No more grass growing. And if a bicyclist rides on this shortcut after it’s rained, a rut will be made. It’s become a deep path. If other students like the idea of a short cut, it’s a popular path too.

The administration gets mad. They don’t want dirt paths and ruts all over their beautiful campus. So what do you think they need to do to eliminate these unsightly paths over the campus and to grow the grass back?

They need to stop students from walking on the paths.

Students now have to use the sidewalks, and so tape or ropes go up to block the paths from being used. Now the flow of students is back on the sidewalks. They can sow grass seeds & water the dirt paths, but they really need to keep the students from walking on those paths.

Now imagine that your brain has pathways used by emotions and thoughts. Groups of brain cells, called neurons wire together, and have created really a strong bond to each other. When you have an anxious feeling and an anxious thought, these thoughts and feelings know to run, lickety split to these pathways. And they run on them in lightening fast speed.

But just like the grass growing example above, you can make new brain pathways. When you do something like different than you usually do……….. like breathing into your anxious feelings, a new group of neurons start to wire together. It feels awkward and clumsy because it’s a new pathway. The more you breathe into the feeling of anxiety, the stronger the pathway becomes, the deeper it becomes. You are actually rewiring your brain by breathing INTO anxiety. ** 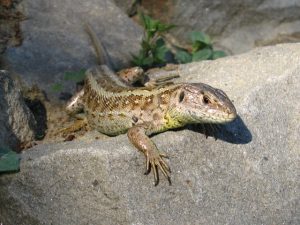 #3. Imagine a Lizard Breathing Into It’s Body & Feeling It

Our brain is really 3 separate brains. Our brain grew from really good existing brains of other creatures. First there were reptiles, and they formed an excellent brain, which was an advancement from the lower level creatures existing at the time.

Imagine a lizard sitting out on a rock, breathing. It doesn’t speak English, or Spanish, or French, or Chinese, or Russian, or any other human language. It sits on a rock, and is detecting the environment around it. The lizard is breathing into its body and feeling it.

Inside this reptilian brain, is an inner alarm system, giving information about the surroundings around the lizard. Pleasant things, like the sunrays hitting the lizard, and unpleasant things like lightening occurring in the sky. The lizard can intuit that its safe sitting outside in calm weather, or if it needs to head for shelter in the storm.

Quick brain detour here………the lizard brain was such a good brain, that when mammals developed, the mammalian brain developed on top of that, and added the ability to feel emotions. And these two brains together were so good, that on top of them human brains added the ability to think thoughts in the neocortex. So we humans have all 3 of these brain systems inside of our brains still.

……………..Back to our story. Since the lizard doesn’t speak a language, it functions through breathing into its body and detecting its bodily sensations……all the while getting information about how safe it is in its outside environment.

This takes us to our next story about our inner smoke alarm inside this reptilian brain of ours. *** 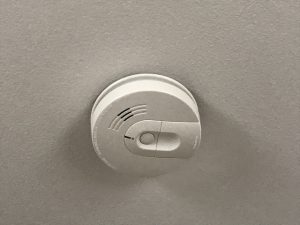 Inside your reptilian brain is your amygdala. That’s where you have an inner smoke alarm detector. It’s sensing your outside environment and reporting back to you. The reports come in on nice, safe things, and reports also come in on dangerous, scary things. These reports started coming as soon as you were born, maybe even in utero.

Your amygdala pays more attention to the bad stuff. That’s why Margaret Wehrenberg (see her book below at the end)………calls it the smoke detector of the brain. It’s alerting you to things you need to notice to be safe.

If you have too much anxiety, your smoke detector is a bit too sensitive. It’s constantly alerting you to danger, even if there is no real danger. It’s saying there IS smoke, but really…….there is NO smoke.

And when you THINK there’s smoke, you’re scared. It seems like the smartest thing to do is to avoid the bad situation.

The more you AVOID what you fear………the amygdala keeps on sending out wrong messages that there is smoke, and you keep on feeling scared.

To get relief, to feel calm and safe………you need to teach your amygdala that there is

NO SMOKE, NO FIRE.

You might be thinking, well how do I do that?

By experiencing the fear, the amygdala now gets to experience the situation instead of avoiding it, and……………..wha-la! The amygdala LEARNS that everything is OK after all.

Your amygdala (and you brain in general) works fast, lightening speed fast. So when you keep feeling afraid, you have to keep at it…….CONTINUE to catch yourself feeling afraid, and then turn into the fear, and breathe into what the fear FEELS like in your body. It’s like learning a new sports skill. At first you might feel pretty awkward practicing this.

The more you practice breathing into your fear and what it feels like in your body……..the easier it gets. And remember, you are actually rewiring your brain.

I forgot to mention……do you know what happens when you breathe into your fear? Your nervous system calms down.

It seems dangerous to go TOWARDS fear, but fear/anxiety really is just an emotion that wants to be noticed. Once noticed, it goes down, or goes away. Paradoxically crazy!

Once a client said to me, “Why would I want to breathe into my fear? My anxiety?” because it seemed like a paradoxically crazy idea to do so.

Summon up your courage, and give this method a try.

What situations does it work for you in? I’d love to hear back from you! What were you fearing that you were able to breathe into and survive to tell the tale?!

The 10 Best-Ever Anxiety Management Techniques: Understanding How Your Anxious Brain Makes You Anxious and What You Can Do to Change It by Margaret Wehrenberg, PsyD

A Time of Uncertainty & Mystery with Covid-19

Do You Struggle with Holiday Stress?